HHCC vs Bank of England

A pretty straightforward victory over the Bank of England touring team on Sunday ensured an enjoyable Bank Holiday weekend for everyone at the Heath.

In slightly chilly and overcast conditions, stand-in skipper Henry Capper won the toss and elected to field. In Jez’s absence our opening attack consisted of Luke Brennan and James Aird. Luke, in particular, bowled as rapidly as anyone on our team has for years. Sticking to a good line and getting some sharp bounce from a hard, flat wicket he troubled all of their top order. At the other end, Airdy bowled an expensive opening over but soon found his rhythm. Two excellent reflex catches by Capper and an inside edge onto the stumps meant the Bank were three down with about 40 on the board and we were into their middle order. 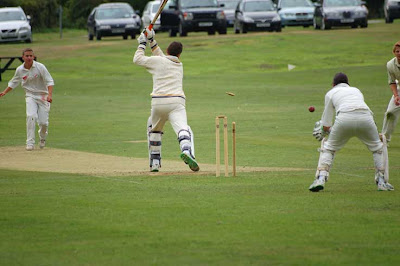 Brad strikes
Brad and I then bowled in tandem for the next hour or so, taking three wickets each to knock over the Bank for around about 140. I bowled probably the best I’ve bowled all season early on, landing it on a good length and getting appreciable turn and bounce – I even landed a googly and it turned! One dismissal was particularly satisfying: the ball pitched on about leg or middle and leg, the batsman played defensively half-forward, the ball ripped across him, taking the edge to be very well caught by Anouj low down at slip. A real dismissal, like on the telly! 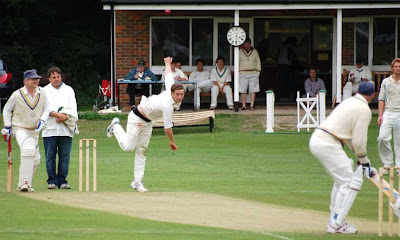 Me Bowling
There were a few entertaining moments as I began to tire and drop short. Nick, fielding on the cover boundary, failed to stop a succession of cut shots, much to his own bemusement. Then I slipped a rank wide down the leg-side which Capper failed to stop. The batsmen went for a quick single. Brad picked up at short fine leg and fizzed the ball in. A direct hit! Surely the batsman was out? But their umpire said no, and the ball cannoned away to the boundary. 6 wides then: that’s got to be a first. 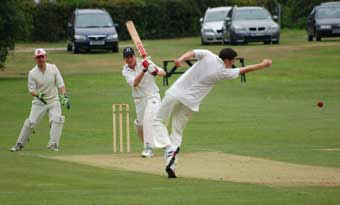 Capper batting
After tea, Capper and Shrimpton opened up and put together a solid partnership, before Shrimpy was LBW. Nick then provided the late fireworks with some beefy hitting as we reached the target one down before even reaching the 20 overs to go mark. With Capper in fine form for his unbeaten 74 we probably could have chased 300.

The Bank’s players – as is their wont – then got dressed up in fancy dress. With a theme of ‘something beginning with G’ there were some great outfits – gangsters, gladiators, gays and even God. With singing and dancing until closing time, the Plough didn’t know what had hit it...
Posted by Tom Jeffreys at 02:08