Ah cricket. Ah England. Two weeks of solid sun, and when it comes to the much anticipated curtain raiser to the Hyde Heath 2010 season, what happens? It bloody rains. But we're a tough breed down at the Heath and a wee bit of second innings rain was never going to stop us getting our cricket on.

With the final of the third IPL being screened in the evening, there was definitely a sense that some of the glamour of that tournament had rubbed off on the Heath. Everyone arrived pretty much on time, Jez, Richard and Napes were all nursing injuries (just like Sachin Tendulkar), and we even had a couple of overseas players in the form of Tim's Australian friend (whose name at this moment escapes me) and hotly-tipped Sri Lankan all-rounder Amala (exact spelling to be confirmed). 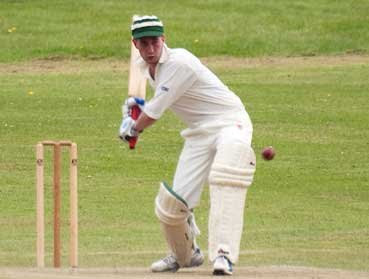 The format of this match is always a slightly unusual one. Two teams of ten Heath players aside face up to each other. In one corner Charlie's Spitfires (captained by stalwart Heath skipper Charlie Samuels) and in the other, Capper's Cavaliers, led by Henry “MS Dhoni” Capper, in a particularly smart retro HHCC baggy blue, dating from Robin's playing days some years ago. The match was to be 40 overs per innings, with a maximum of 8 overs per bowler. Batsmen were allowed a life until they reached 10, and had to retire at 50. 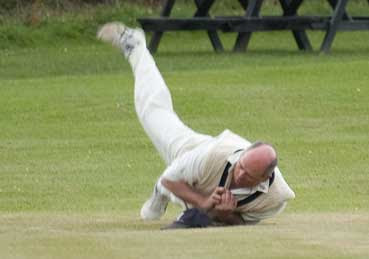 Richard Cousins takes a low catch at 1st slip
And so to the cricket. Somebody won the toss, and we (the Spitfires) batted first. Haddock and Simms got us off to a good start, and Amala continued the good work, driving wristily and picking the gaps at will. If we can get over the fact that it really is quite a trek for Amala to travel from Walthamstow every Sunday, we could have a pretty serious top order this year.

And then, the moment they'd all been waiting for: I strode to the crease, feeling in no form at all. After using up my life top edging a first-ball mow off Richard Austin (bowling off breaks today) I Settled down to score a pretty scratchy half century. Mistimed drives for one were interspersed with the odd pull shot and edge to third man, in a characteristically dour innings. In my defence, Ali, Nick and Rich all bowled extremely well and I was pretty pleased just to battle it out until told to retire. Shame it doesn't count for the averages... 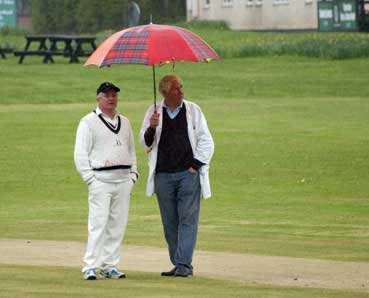 Captain and President survey conditions
After some powerful striking by Brad at the death, we made it up to 193, a competitive total we thought. Rain, however, brought reduced overs and target and it all got a bit confusing. But suffice to say that I bowled rubbish, Capper and Nick both made runs in quick time, and we lost fairly comfortably.

Hey ho, it was nice to get the season started, see everybody again, and to be told by Richard Austin that my new haircut apparently makes me look like George Orwell. Ah the Heath.
Posted by Tom Jeffreys at 05:43