What with my absence from the last match of the HHCC 2010 season, the club's honourable President has taken it upon himself to spread his lies and Stalinist propaganda against your dedicated correspondent. Here it is in full below:

This week you have a bit of a treat. Rather than the ethanol-withdrawal induced reporting you know and love, this week there is a cold-blooded, factual, unbiased, sober (well almost) view of events on the “Heath”. No tales of vicious phantom leg-spin bowled at mere children – actually, we might have done better if there was. Just tales of my last game as Chairman, a chance for the team to achieve the highest number of wins in a season, a chance for five people to avoid the Duck Award, a chance of making enough runs to win the batting prize, enough wickets to take the bowling prize, a fielding performance to take the Fielding Cup, sandwiches to influence the awarding of the Captain's Cup, or even behaviour sycophantic enough to influence the President’s Cup (the Prix d’Or of Hyde Heath).

Right, so much for the scene-setting, what about the cricket? Charlie walked to the wickets, and promptly lost the toss in a timed game. Now my esteemed correspondent doesn’t like limited overs cricket and I can sympathise. However, once we lost the decision and were put in, the excellent pitch produced by Mike O’the Common became a handicap: make 200+ and you struggle to prize batsmen out, score too few and it’s a cakewalk. We achieved the former. However, the battle for Cups took over.

Henry and Dom walked out to impose themselves and, allegedly, both were in “the Zone”. Dom needed a small task of 250* to take the Batting Cup but thought he would take Henry out as his first task. “Come one” is always a frightening call, particularly when the ball is lodged in gulley’s hands. Apparently Shrimpy, in the pavilion, was out of his seat in no time to greet Henry back and stake his own claim for glory, thanking Dom on the way. Could he take control? Could Dom make the 250? Well, not really, but both batted really well. The score ticked along. Shrimpy decided to give one fielder (their captain, no less) catching practice and after four close calls was taken at mid-wicket by the same man, with an excellent catch in spite of very sore hands, for a good 34. Dom missed his target by 224 but was unlucky to pick out deep mid-wicket.

Enter Nick Burgham who just loves Iving and Pitstone’s bowlers. He really got stuck in with some violence and made 49 with an array of shots to make Ian Botham jealous. However, avoiding buying a jug seemed more important than ever and he perished on 49. Viney and Sims took over, both scoring freely. Viney had the unique experience of being called back by the bowler of all people, after being caught off a head-high full toss. Dom, umpiring at the bowlers end and fearing another challenge to the batting cup, (only 600 short) wouldn’t call “no ball” and Brad at square leg sympathised. Would Jeremy have been so generous with the Bowling Cup at stake? Reprieved, Viney pushed us up to 226 for 6, helped by an excellent 15* from Spencer

Bad news for Tom and Jeremy, however; an innings with no ducks (not one!). The Duck Prize (probably the ultimate end of season reward and usually achieved with 6 or 7 ducks by someone called Tim Nutman) might just be traveling in to London with Tom’s first and second ball ducks beating Jezza’s first and a few balls. It only needed one slip-up from any of three players, but…

Tea and cakes next with the stirring sight of the President, who has not been in the best of health recently, arriving chauffeur-driven to a standing ovation which even brought a dampness to the Chairman’s eye, to sample the fare. Great to see him back! Needless to say tea did not disappoint and the Heath took to the field with possibly (certainly) too many runs and far too much cake as well. 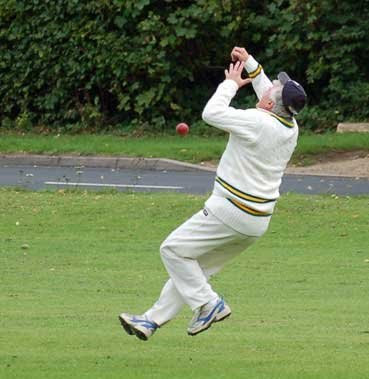 Jeremy and Shrimpy were neck and neck in the race for the Bowling Cup with little to choose between them. Both bowled well although the opening bat seemed to be a bit impatient, hitting Jeremy particularly severely around the ground. Little did we know that he had to retire to return to college but not before he had been dropped in consecutive balls. The second of which ruined a run from Champagne Charlie, 'El Capitano', who had looked invincible under the high ball in the last few matches.

Unfortunately after the openers' exits, the other batsmen failed to shine; in fact they were truly pedestrian. In the past at Hyde Heath the odd shooter or ridiculous movement off the seam could still have won the game for us but Mike is far too good a groundsman and the pitch played true – too true! 123 for 7 but no chance of winning, particularly against I & P’s canny league players. There were several bright spots however: Sohail bowled beautifully with only 9 runs off his 7 overs, Shrimpy, 11 overs, 2 for 28 and Brad, bowling what one of my old cricketing friends would describe as declaration bowling. Can you tell me why half of Hyde Heath who bowl fairly well off five paces feel they are Swann’s half-brother? Stand up Brad, Austin and Barnsley (spot the odd one out). However Shrimpy has proved me wrong with excellent bowling all season. Maybe some bowlers might reverse the trend!

Right, on to my reason for taking this write-up on. Timed games are good fun and when we were weak and with winning out of the question, achieving a draw against far better players by batting second was a bit of fun. But the boot is on the other foot now. We would have walloped this side by either batting second or playing overs. We can’t rely on other sides’ naivety or Charlie winning the toss with his double-sided coin. Not convinced? Neither am I totally!

Still, what a real pleasure to see HHCC's great spirit in this rather negative game. Was it that they didn’t have to retrieve the ball from the woods time and time again as our previous correspondent “bought” a wicket? Was it that the season was ending? Was it that the match started an hour and a half earlier and therefore we were in the pub much earlier? I don’t know and, really, I don’t care. What I did notice was a really enjoyable time for me is coming to an end. Tom Hicks might have to buy his team to enjoy their performance but this Chairman has just sat and watched eleven players time after time who have played cricket on the Common and loved this great game we all share. What great value!
Posted by Tom Jeffreys at 10:43