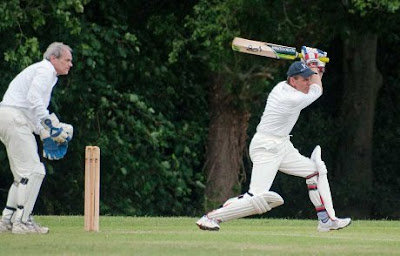 Matt Sims brings the carnage.
It's now over two weeks since Hyde Heath drew their first match of the season, at home against Ley Hill, and with the passing of time has come, inevitably, the fading of memory. Fortunately, Chris' excellent photos on the Hyde Heath website have done a little to prompt my hazy recollections of the match. I think the one of Matt's satisfied admiration of his own scorching cover drive is probably my new favourite cricket image. “Dare thee challenge me, bowler?” it says. “I laugh in the face of your bowling, and dispatch it to the boundary with ferocious elegance, thusly.”

Matt's blistering strokeplay came after a very slow start (I think he took 16 balls to get off the mark), and after our openers had failed, he helped to put on an increasingly confident partnership with Shrimpy, who's in belting form at the moment. While these two were at the crease, the target – about 180 – looked eminently achievable. But as so often, the fall of one wicket led to a clatter, and I ended up having to block out the last couple of overs to secure the draw, some 30-odd runs short.

Earlier, I'd been relegated to third-choice spinner (hardly surprising given recent form) as our severely depleted bowling attack toiled hard against an unthreatening but combative Ley Hill line-up. Jez bowled an extremely long and tidy spell, but only managed the solitary wicket, Shrimpy and Rich both bowled well, but I was again expensive (although I did manage a wicket and, would you believe it, a run-out) and the oppo's total was 30 or so above what it might have been. With more seamers at our disposal (no Brad or Ali today) or a less profligate leg-spinner, perhaps it could have been 5 wins out of 5.
Posted by Tom Jeffreys at 06:04