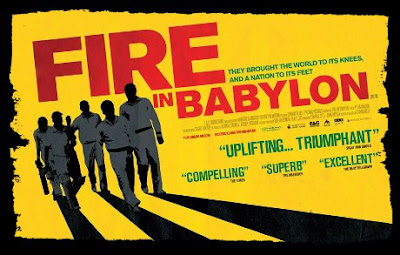 For cricket fans, the release of Fire in Babylon was probably the most exciting piece of cinema news in the past decade or so. Finally, a film about cricket. Sure, there have been others in recent years – Lagaan is meant to be quite good, Out of the Ashes (that one about the Afghanistan team) is apparently excellent, and there’s always the hilarious sounding slasher/village cricket movie I Know How Many Runs You Scored Last Summer – but Fire in Babylon promised something else entirely.

Most cricket films – and indeed cricket books – fall into two main categories: those for cricket obsessives that nobody else could possibly be interested in; and those that aren’t really about cricket at all, but instead use cricket to discuss something else. These tend to appeal to the broader audience but suffer from the problem of not showing enough cricket. Fire in Babylon, however, does both.

For the non-cricket fan it tells of the fascinating and at times genuinely disturbing fight for equal rights that has been one of the defining racial issues of the twentieth century. Some of the footage is truly shocking, both in terms of the violence it contains, and in terms of how recently much of this took place. Frankly, it’s appalling to think how recently racism was still not only acceptable but institutionally approved: apartheid in South Africa only ended in 1994. For context, that’s the year Brian Lara scored 501 against Durham and the year Stephen Fleming made his Test debut. I was 9 at the time. It’s that recent.

What Fire in Babylon does so well is to depict the emergence of the world-conquering West Indies team of the 1970s and ‘80s through the eyes of those that were there. There’s very little narration; instead it’s left to the likes of Michael Holding, Viv Richards, Clive Lloyd, Colin Croft, Andy Roberts and Gordon Greenidge to tell their stories. All are insightful speakers, and the sense of destiny and of being driven on by something far bigger than cricket is genuinely fascinating, if in places it drifts towards cod-spiritual nonsense. The presence of various Rastafarian pseudo-philosophers and contemporary musicians is entertaining, but in places rather clutters the narrative.

One of the other downsides of this 1st person approach is that you only get one side of the story. It would have been good to hear more from the batsmen who had to face these four-pronged pace attacks, and it certainly would have been interesting to hear what Tony Greig has to say about his infamous ‘grovel’ comments all these years later.

This, however, is more than made up for by what Fire in Babylon offers to the cricket fan: cricket. Lots and lots of cricket – cricket at its most brutal and gladiatorial, its most violent, dangerous, confrontational and terrifying. None of which are words one usually associates with the sport. There’s great footage of batsman getting hit, of Viv Richards nearly decapitating an umpire, and of Holding’s silky smooth run up. Much of it is footage I’ve never seen before – and as a cricket DVD obsessive, that’s something rare.

Whilst I love cricket primarily for its nuances – the trickery of the leg-spinner, the delicate late cut, the inspired captaincy decision – there’s no question that, as depicted in Fire in Babylon, cricket is also a thrilling spectacle. Or rather, it was. I always despise those washed up has-beens who lament the birth of the helmet as the death of cricket (what kind of idiot would think that?) but something has certainly been lost from the game now that batting is such a safe and comparatively simple task. Gone is the concept of batting as grim survival. And consequently gone too is the sense of the batsman as brave, embattled hero: from Brian Close to Mike Atherton. Partly because of the pitches, partly because of the workload, and partly, probably, just down to luck, no batsman these days has such challenges to overcome.

Fire in Babylon may be a flawed film – one that’s at times unwilling to take a step back, analyse, and examine complexity or contradiction – but it is a brilliant one. Funny, genuinely exciting, brutal, shocking, and enlightening: a triumph.
Posted by Tom Jeffreys at 02:14