There are various ways to prepare for a game of cricket. A pre-match net perhaps, or some gentle fielding practice. I’m ashamed to say however that the Friday night before the President’s Day match I did not spend brushing up on my technique or studying video footage of the oppo. Nor indeed did I attend the Hyde Heath Beer Festival, which was by all accounts a triumph. No, instead I went a-boozing in glamorous Hackney until approximately 8 in the morning. Somehow I made it to the Heath on time (despite various self-induced transport difficulties) and at 12.30 we were ready to rumble. 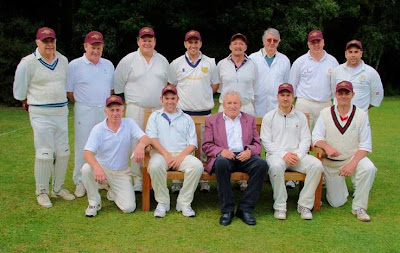 President's XI
The President’s XI (for those of you who aren’t aware) is an invitation XI – effectively the HHCC President Robin Richards selects the best eleven cricketers that Hyde Heath plays against. The side was a strong one, captained by Robin’s son and ex-Heath skipper Ali. We would need to play well. 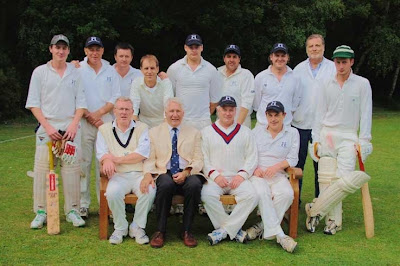 Hyde Heath CC
Charlie won the toss and, as ever, elected to bowl. Fielding definitely occurred, but thankfully I took little part in it. Jez and Nick bowled well early on and we took wickets regularly. I’m afraid to say I can’t remember too much of what went on, except for the odd moment every now and again, which I shall attempt to recount now: Hugh (who you may recall made 50 against us last week) was dropped badly by the usually safe Napier Munn at mid-off. It was a howler, and we prepared ourselves to pay for the mistake. But only a few balls later he absolutely creamed an off-drive drive straight at the same fielder. Somehow Napes held on. The ball was seriously travelling and never got more than 6 inches of the ground. It was a wonderful catch, but even better was to come.

Much to my surprise, when I came on to bowl, I did rather well. Driving properly through my action, I was accurate and getting some turn. In – I think – my fourth over however it started to go wrong. Or right. The first ball was horribly wide. But the batsman – Ollie Haddock – reached for it and drilled it towards cover. Four runs. But no, Nick the Kiwi leapt salmon-like and with two feet off the ground caught an absolute screamer. Two balls later I dished up a wide long-hop which was cut to point, where Will took it diving forward. Three great catches and some LBW decisions in our favour and the President’s were all out for 111.

Ali Richards to Matt Simms...
For some bizarre reason I was asked to open the batting alongside Capper, and so tottered to the crease hardly able to even see. With such a low total all we really needed to do was bat sensibly, but when Capper was caught and bowled by Ali, it looked like we might make a meal of it. Fortunately I decided to bore the opposition into submission. Finding able allies in, first, Matt Simms and then Simon Napier-Munn, I eschewed all stroke-play in favour of dead-bat forward defensives and terrible running between the wickets. There were a couple of memorable shots – a solid pull through mid-wicket off Tim Nutman, and later a straight drive down the ground off Ali, but in truth it was pretty gritty stuff. Anyway eventually it did the job and we won by 7 wickets. I finished unbeaten on 46. Mark Richardson would have been proud. 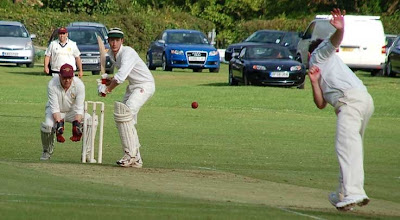 My boring innings
Sunday of President’s Weekend usually involves a six-a-side tournament, but with several teams dropping out we decided to play a Twenty 20 match, with ten(ish) per side. One team was made up of players from Hyde Heath and the other a composite side featuring five from Yeading Cavaliers alongside Capper, Jez, Nick and myself. We lost the toss and were asked to take the field. The Powerplay saw us bowl accurately and field poorly. Shrimpton (Hyde Heath skipper for the match) took full advantage, racing to 30 before getting himself out. Hyde Heath’s middle order then struggled as Jez applied the squeeze from one end and I dished up a load of old rubbish at the other. Somehow I took 3 wickets, thanks to a brilliant running catch at long-on by Nick (after he’d put down a sitter at the same position the previous delivery). Father and son Danny and Charlie Samuels then batted sensibly to get the Heath up to 145, a very defendable total.

We (Yeading Heath?) then lost Capper early (again) and really struggled to score at any kind of rate against the pace and accuracy of Brad Holt and a visiting fellow called Willis (no, not that one). But Yeading skipper Leather joined Jez at the crease and they began to forge a partnership by picking the gaps and running hard. With 70 needed off ten, it was anybody’s game. But then an expensive over from leg-spinner Jay and two poor ones from Will turned it our way, and eventually we romped home with almost 3 overs to spare. Jez finished unbeaten on 45 and Leather on 41.

So it was certainly a cracking weekend, and hopefully lots of money was raised so for the club. We’re still unbeaten and with no away matches until mid-July, it’s looking like being a record-breaking season.
Posted by Tom Jeffreys at 03:46