It had to come to an end some time. Yes, Hyde Heath lost their first match of the season, and I’m ashamed to say it was under my captaincy. Whenever they’re given a bit of a pasting, the England team generally talk of “taking positives out of the game”, and it's true that one often learns more about the game of cricket from defeat than from victory. It was certainly interesting drowning our sorrows in The Plough and attempting to see where it all went wrong. I wonder what England Captain Andrew Strauss – who, rumour has it was watching our match for a brief period – would have made of it all.

In truth, it went wrong right from the start. I lost the toss and Southwell Ramblers skipper Tim invited us to bat first. From memory, this is the first time that we have had to bat first all season, and the different pressures involved in setting a target seemed too much for our batsmen, who perished to a succession of decidedly average shots. Haddock was the first to go, with a leading edge high to mid off, and Capper, today at no. 3, was bowled attempting a horrible sort of sweep to a full pitched delivery. It’s a testament to the strength of our batting line-up that we have managed to compile big scores despite the recent poor form of our main batsman. But not today.

It was good to see James Aird back with us, but not so good for me to have to give him out LBW without scoring. He was plum. Napier Munn was then also LBW and the two Richards – Cousins and Austin – departed in quick succession. When Atif was caught for 0, our innings really was in tatters. I came out at number 9 with the score (as far as I can recall) 48 for 7. A right old mess. Southwell then brought the spinners on, and for a brief time, Ben and I managed to steady the ship. I was timing the ball well and feeling pretty good, until drilling a return catch to be dismissed for 26. It was the kind of half-shot – torn between a full lofted drive and finding the gap along the ground – that characterised our dismal batting display. The tail wagged a bit, but we were finally dismissed for 125, and it was never going to be enough. 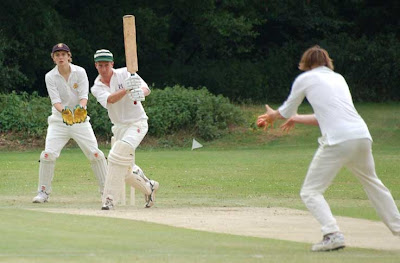 Me getting out
When our turn came in the field, I decided that short spells were the way to go. We had a lot of bowling and I wanted to give everyone a quick burst to see who would be most likely to produce the killer spell that we so desperately needed. Jez took a wicket in the opening over and Richard Austin bowled superbly from The Plough end to take four for 15, including Southwell’s two star batsmen. At 50 for 5, they were in trouble and we were well in the game. I then made a double bowling change, replacing myself with Airdy and Richard with the off-spin of Atif. In retrospect, as Richard Cousins pointed out, it was here that our momentum was lost. Neither bowler had played for some time, and Atif in particular struggled to find the right length. Airdy bowled well, but with his extra pace and a fast outfield, boundaries were coming, and we couldn’t afford them. 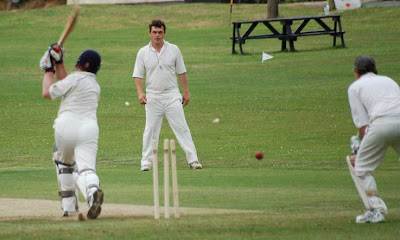 Richard Austin strikes as Jez looks on
And yet, it all could have been turned round in an instant when their young batsman chipped the simplest of return catches to Atif. Somehow, unbelievably, he dropped it, and our chance to break the partnership had gone. Jez returned to remove the same batsman but by then the score was 115. We sensed the possibility of something special, but in reality it was too little too late.

So what did we learn? Firstly, if catches win matches, then shocking drops have a demoralising effect on the bowler and, indeed, the whole team. But in reality we lost the match because nobody in the top six got over 20. Being part of a performance like that, it’s clear why we always field first. But in a way that merely compounds the problem. If you always conceal a weakness then there’s never a chance to rectify it. I think some strategy is needed: a clear definition of the role of each batsman when we have to set a target. But first, a proper net session might not be a bad idea.
Posted by Tom Jeffreys at 02:20