And now the big one: old rivals Ballinger arrived at the Heath in what was being billed by many as the clash of the Titans. We were taking this one so seriously that some of the team even had net practice on Friday evening and Saturday afternoon. Preparation of the highest calibre.

Charlie was back to captain the side but for the second week running we lost the toss and were asked to bat. Their openers bowled tidily but we made a reasonable start before Capper was bowled by a good one and Haddock played one shot too many and was caught (I forget where) to end an innings that some were reffering to as ‘flighty’. This paved the way for James Shrimpton to play his finest innings of the season so far, an elegant but hard-hitting 75. He almost single-handedly held the Hyde Heath innings together with a series of brilliantly timed cover drives and flicks through mid-wicket.

Support came in patches, but when Shrimpton was dismissed the innings began to falter until James Aird and Brad Holt came together for an entertaining pre-tea partnership. Aird – whose 34 came of just 17 deliveries – was instrumental in getting the Heath up to a defendable total of 212. For those of you interested in such matters, I was feeling decidedly sketchy for most of the day and got caught behind chasing a wide out-swinger for 4.

Nick bowling to a 14 year-old
When the Ballinger openers came out, we were surprised by the fact that one of them was only 14. We might have assumed we’d get him out quickly but it was not to be. They put on an opening stand not far off 100 and suddenly our total didn’t look so big after all. The Heath were looking uncharacteristically flat – the bowling tidy enough, but the energy levels in the field well down on the usual standard. Several catches went down, including a complete shocker where Charlie and I each left the other to take responsibility. The bowler – Jez – was distinctly unimpressed.

But Brad eventually got the breakthrough and then it was over to James Aird. Coming after his entertaining innings, he bowled with hostility and control to tear through the Ballinger middle order and return figures of 6 for 16, his best for the Heath. 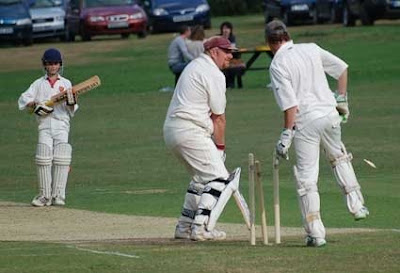 Bowled him!
With two wickets needed and four overs to go, victory was within our grasp. Torn between recalling Brad or yours truly to try and grab a wicket, Charlie opted, to my surprise, for me. When the bastman charged down the wicket and got stumped it looked like an inspired decision. But in the end we couldn’t quite force the final breakthrough, and the match was drawn with Ballinger 9 wickets down. Both teams had played some good cricket (and also some rubbish cricket) so perhaps, in the end, a draw was the right result.
Posted by Tom Jeffreys at 03:08