Lord's - some photos and a very little history

The next stop in this Ashes series that you may just have heard about lately is Lord's, the 'home of cricket', which, since you ask, is St John's Wood, NW8. In the spirit of evangelism, I thought that I might put a few photos of the ground up and maybe even write a little bit about it to try to give some idea of what all the fuss is about. 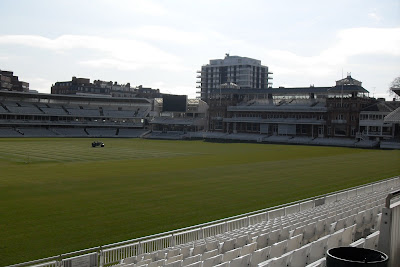 The pavilion in pre-season serenity

Cricket has been played on this pitch since 1814, when the wine merchant and entrepreneur Thomas Lord moved the Marylebone Cricket Club, or MCC (formerly of Dorset Square, NW1 and White Conduit Fields, N1), to St John's Wood.

The MCC, founded in 1787, had shortly after established a Code of Laws for the game of cricket (as it did for lawn tennis just under a century later), very necessary in view of the sums aristocrats of the time were gambling upon it. It became and remained for a long time the game's central administrative body as its laws were adopted throughout the country, the empire and the world (though attempts to break the American market continue to meet obstacles).

In view of this history, it is perhaps not surprising that the club built up quite a reputation for stuffiness, refusing until 1997 to allow women to be members or to enter the pavilion. Its 20-year waiting list means that, in some respects, it can be slow to change and that its members are prone to wear the club's colours of red and gold as much as possible when finally accepted. 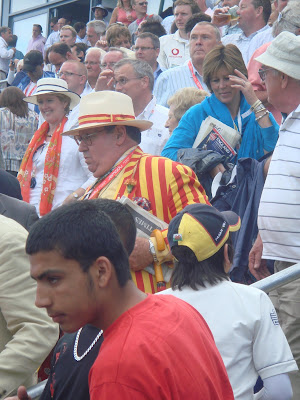 He was wearing the tie too

Yet the MCC is now very forward-thinking in its support for and tours of emerging cricketing countries around the world, from Argentina to Afghanistan, the latter one of the most notable success stories over the past few years. And at one end of Lord's itself stands the rather space-agey media centre, built for the 1999 World Cup. 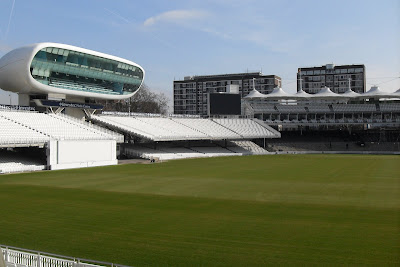 The media centre, a magnificent viewpoint

And, though it is rather a cliché , it is this combination of tradition and modernity that makes Lord's such a magnificent venue for cricket. The teams make their way out from the pavilion through the Long Room, filled with paintings from cricket's centuries of history and the members' applause, and are greeted by the media centre, the advertising hoardings and a chanting crowd 30,000-strong. The familiar slope of the pitch remains even as ever more inventive strokes, such as Kevin Pietersen's switch hits, are played upon it.

The only problem for tomorrow? Touring teams tend to rise to the occasion: the Australians have not lost there since 1934.
Posted by Tom Cameron at 08:03