As those of you following the Tragics on Twitter will know, I was happily (though anxiously) amongst the spectators in Cardiff on the first and last days of the opening Ashes Test - one of the more swiftly snapped up of my girlfriend's date suggestions.

Broad sunshine swathed Test cricket's newest ground, picturesque and filled to capacity, as the Welsh Assembly's £3.2m bid for the match was rewarded by a finish as fine as any of those in the famed 2005 series (especially reminiscent, with roles reversed, of Old Trafford). The controversy surrounding Cardiff's selection as a venue ahead of the more established Test grounds in Durham and Manchester was largely forgotten as a well-organised week was capped by Paul Collingwood's defiant, intelligent innings and unexpected heroics from England's (or Britain's) last pair. 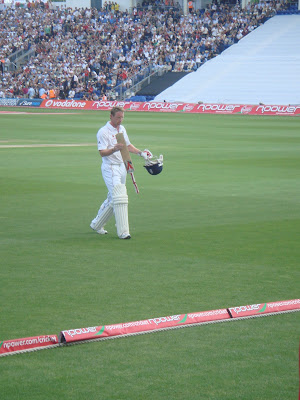 An enjoyable couple of days, then, and England's best of the match, but worrying nonetheless. Australia's attack was without Brett Lee or Stuart Clark, their two most experienced bowlers, and few difficulties had been anticipated from Nathan Hauritz, the off-spinner with a first-class bowling average of 45.84. Yet England's batting line-up compiled not one century in two innings on a benign surface, whilst watching 4 Australian batsmen of the 7 who came to the crease reach three figures. Admittedly, Ben Hilfenhaus did deliver the best performance of his short Test career, maintaining a tight line and getting good movement, and was definitely underbowled on the last day (15 overs to the less impressive Johnson's 22), whilst Siddle provided bustle and short-pitched menace and Hauritz steadily grew in confidence after a nervy first 5 overs.

England's batsmen, however, got out to some pretty ordinary shots. Enough has already been written about Pietersen's horrific sweep when set in the first innings, but too little about Prior and Flintoff perishing to expansive drives against the new ball late on the first evening, after their partnership of 86 had just about wrested back the initiative. Prior's dismissal in the second innings, attempting to cut an off-spinner on a sharply turning pitch, was also frustrating: so many of his runs have been scored against the West Indies (739 in 10 matches, as against 396 from his other 9) that it is doubtful whether he is a sound option at No. 6 against better sides. Strauss looked very composed in each innings, before indecision (against a Johnson short ball) and a poor decision (to cut at Hauritz twice in a row) cost him. He needs to stamp his authority on this series with the bat sooner rather than later.

As concerning as the batsmen's failure to capitalise having played themselves in (the first 10 English batsmen reached double figures in the 1st innings) were the workings over that Bopara, in the 1st innings, and Pietersen, in both innings, received. Bopara was understandably very scratchy after being struck in the gullet by a Siddle lifter, but Pietersen was exceptionally jumpy, even for him, at the start of each innings and looked all at sea right through his 20-minute stay on the final morning, the result, very likely, of a more fragile ego than he lets on. My confidence in Cook to improve his 32% conversion rate of 50s to 100s - as he must - remains slight. 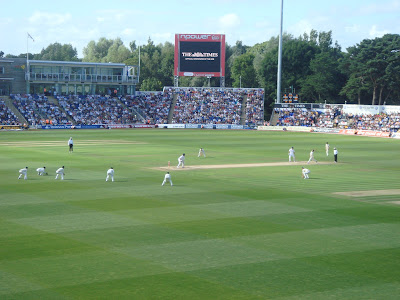 Ben Hilfenhaus in his delivery stride on the final day

In my view, then, there is certainly a case for lengthening the batting order for the livelier pitch at Lord's and including Bell at No.6, where he has had some success. This decision may be forced upon England if Flintoff is injured, but should arguably be embraced regardless. The problem with that, of course, is that one cannot rely on Flintoff's body holding up as part of a 4-man attack. Perhaps, as Mike Atherton suggests, England should be prepared for life without Flintoff: after all, since the 2005 Ashes, they have won 12 of 25 Tests without him and only 3 of 23 with him. It is hardly likely that they will be this ruthless though.

Although Monty Panesar will surely be left out for the Lord's match, it is very difficult to make further predictions as to the bowling line-up in view of the doubts over Flintoff's fitness, Harmison's temperament and Broad's role. Either Harmison or Flintoff is needed to provide the steepling bounce that seems likely to account for the phenomenon Phillip Hughes (Stuart Broad was misused in attempting this), although it is just possible that Onions may remain ahead of Harmison in the pecking order. Anderson and Swann must surely retain their places, whilst the selectors will be unwilling to drop Broad after one bad match in a fine summer.

Which leaves me with Broad, Swann, Harmison (or perhaps Onions) and Anderson, with Bell's inclusion depending on Freddie's fitness. For the Australians, the selection is comparatively straightforward and the same team will line up at Lord's, health permitting. I'm dreading Mitchell Johnson's rediscovery of the inswinger that made him man of the series in South Africa and was conspicuous by its absence in Cardiff. England's best hope is for Strauss to find the form and the mettle he showed this winter.

Do let us know what you think about the selection, particularly on the bowling front...
Posted by Tom Cameron at 05:50