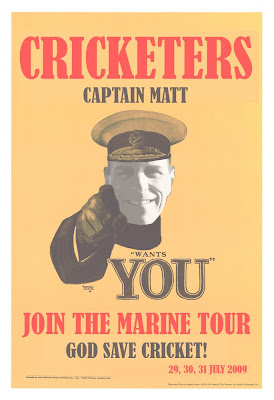 Tour time! This year Captain Matt Simms had declared a marine theme, and recruited an able crew to man the good ship Heath and take on the might of Kent’s cricketing villages. The various vessels arrived in Meopham in time for a spot of overpriced lunch at the aptly-named Long Hop. And then, we were ready to rumble.

The oppo won the toss and invited us to have a bat. For some reason I was asked to open the innings alongside Henry Capper, but the experiment failed when I got a leading edge to cover and was dismissed without scoring. No matter though, as Capper, James Shrimpton and Will Reynolds all registered half-centuries to take the Heath to a respectable 223 off our 40 overs. Will’s peppering of the third man and fine leg boundaries more than made up for a stolid passage in which Ben Sonley ground his way to 12 from 42 balls. In the closing overs the quest for quick runs produced some amusing moments – in particular, ducks from Atif, bowled having a wild heave, and Captain Simms, stumped by a 14 year-old keeper off the bowling of a 12 year-old.

Meopham started brightly, but their hard-hitting, gum-chewing Aussie opener was dismissed courtesy of a stinging return catch by Jez, and the Heath sensed their chance. Richard Austin bowled his allocated overs off the reel and, finding an immaculate length and zipping it both ways off the pitch, finished with the outstanding figures of 5 for 19 to break the back of the Meopham innings. At the other end, Shrimpy followed up his 50 with three wickets and we bowled them out for 103 – our first victory against Meopham at the third attempt. Credit, unusually, must go to Atif (Keith) “Scrappy Doo” Mirza who took a very good catch diving forward to partly atone for his earlier batting.

The marine theme guaranteed some interesting awards in the post-match ceremony. We were all given fish badges, the three batsmen who registered 0 were awarded rubber ducks to wear, and Will was honoured with a Shark Head award for ruthlessly edging the ball behind square all day. Then the evening saw our return to the scene of so much amusement last year – namely Lashings. But, to our disappointment, the outdoor beanbags had been removed – apparently they had gone mouldy, or something. We also forwent the usual expensive dinner in favour of takeaway from a rather insalubrious kebab shop, in which some local crackhead repeatedly asked us about the exact spelling of the word “circumcised”. God bless Maidstone...

The next day saw us prepare to take on the mighty Harvel, who we somehow beat last year (courtesy of a great spell from Ritchie and some excellent batting from Keith Mirza and, um, me...) Anyway, this year we were running rather late, thanks to some poorly functioning alarm clocks and Matt’s erratic navigating. The game was 50 overs this time and we decided to bat first – mainly, as Matt realised, because nobody was really in a fit state to take the field. The skipper opened the batting with Capper and the two of them ground out a really attritional opening stand. At one stage we were 16 without loss from 10 overs. Riveting stuff – so much so that Richard Austin, scoring at the time, had to call for a knife, his pencil blunted by a seemingly endless succession of dots.

Matt’s eventual departure was followed by Shrimpy’s – pulling a long-hop to a diving mid-wicket – and I joined Capper at the crease, our aim to bat until lunch. That we duly did, courtesy of some good batting from Capper and some characteristically tedious blocking from yours truly. Lunch was a delicious curry and that – or my dismissal of last night’s booze into the ladies loos (sorry!) – gave the innings a bit of impetus. I pulled the first ball after lunch for four and hit a few boundaries off their Sri Lankan leg-spinner, but was then stumped for 41 with about 8 overs to go.

That actually worked out rather well as James Aird and Richard Austin then attacked in fine style. Airdy made 40 in double-quick time, including some beefy hits for 6. We finished then with 207. Was it to be enough?

In short, no. But before their innings even started, I was on my way back to the pavilion nursing a cut cheek and black eye thanks to their opening batsmen. As I was placing the bail on the stump, he decided to use his bat to hit the stump more firmly into the ground, and instead cracked me in the face. It bloody hurt, but was obviously rather hilarious as well, so sympathy was pretty minimal. Oh well.

We dismissed their openers quickly, but that proved to be a mistake as Sri Lankan overseas player Dhushantha Ranatunga proceeded to dismantle our bowling attack with grace, timing and precision placement. Airdy bowled splendidly to at least force the odd defensive stroke, but once he’d reached 50, Rana gave him the charge, donked the ball over the sightscreen for 6, and promptly retired.

The remaining batsmen were equally murderous, if less attractive, and myself, Keith Mirza and Ritchie (crocked after yesterday’s exertions) came in for some fearful tap. Keith went at 10 an over and Ritchie’s six balls cost 14, including a hilarious misfield from Keith at fine-leg. The ball was rolling gently towards him, but a couple of young children were accidentally standing in the way. Instead of walking round them and picking the ball up, Keith calmly stood and watched as it dribbled over the boundary for 4. Cue an apoplectic exchange between the bowler and Scrappy Doo. One only hopes the children were out of earshot by that stage...

Anyway, Harvel knocked off the runs in 25 overs, which left us plenty of time for boozing and a game of one-hand-one-bounce. Exactly as last year, Atif demonstrated his poor sportsmanship by continuously refusing to walk. Our catching though was excellent – if only it had been the same in the real cricket.

That evening, disappointed by Lashings’ lack of beanbags, we headed to the Maidstone Wetherspoon’s for some well-earned binge-drinking. Somehow Capper managed to place himself in charge of the whip – even the barmaid asked us why we had entrusted out money with that guy – but a load of tequila later, nobody was too bothered.

Friday then dawned bright and fair and we spent an enjoyable morning watching Australia’s batsmen capitulate against the swinging ball at Edgbaston. Might that be an omen of things to come against Pett’s Wood? Well, maybe.

Matt lost the toss and we were again invited to bat. Capper’s third opening partner in as many matches was Scrappy Doo, attempting to make up for two consecutive tour ducks, which he did, kind of: off the mark with a wild heave that went down to third man for 4, and bowled essaying a similar shot an over or so later. The Heath innings was dominated by 75 from Shrimpton who had earlier run out Capper for 21. The fact that he had told me the over before that a run out might be on the cards suggests perhaps the competition for the batting cup is getting pretty cut-throat this season.

Richard Austin also made a hard-hitting unbeaten 36 down the order, but it was Sohail, representing the Heath for the first time this season, who really caught the eye. His 53 included some seriously meaty blows, none bigger than a massive six into someone’s garden a good 30 yards over the long-on boundary. All of which helped us to a pretty solid 235 all out, and with a strong bowling line-up we were confident of forcing victory.

I opened the bowling from the pavilion end and Sohail and Airdy did the work from the other end. Sohail took 2 wickets, before I got into the action, yorking one of their players. And then, the turning point: a triple wicket maiden for yours truly. The first one dipped quite sharply, turned a fraction and took leg stump, the second was a rank long hop that the batsman miscued straight back at me – caught and bowled. The new batsman managed to keep out a vicious leg-side full toss to avert the hat-trick, but then thumped another half-tracker, this time way down the leg-side, straight to Airdy at short fine leg. Oh dear, what an over.

I continued to dish up a load of twaddle and for a minute it looked like Pett’s Wood might escape with the draw, but Jez came on and took the last wicket to finally dismiss them for 132. A convincing victory that made up for last year’s lacklustre defeat, and meant we finished the tour with a creditable 2-1 win/loss ratio. And so to the pub again; for some final awards, fines, and massive thanks from all to Matt for organising yet another splendid tour.
Posted by Tom Jeffreys at 01:38