Apologies to all our many fans for the quietness of Cricket Tragics of late: there’s nothing like a thrashing in the Ashes to quash our enthusiasm for writing. I also had to attend a wedding last weekend and therefore missed my first Hyde Heath match of the season – by all accounts it was an eventful day, with a first-rate strop from Richard Austin and Henry Capper given out LBW by his dad.
But it was good for me to get some time away from the game and the gruelling schedule that all HHCC stalwarts must deal with. I had some time to really think about my cricket and come back stronger than ever. Well sort of. We won the toss (again) and elected to field (again). Austin and Jez kept things tight against a rather shotless opening pair before Jez struck with what was described as the one good delivery of his spell. 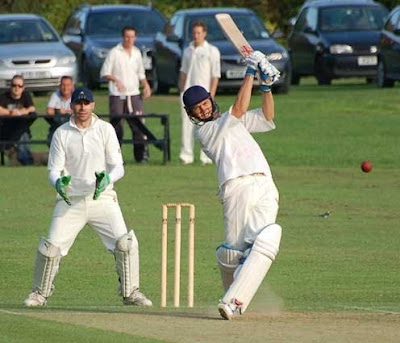 James Shrimpton on the attack- or is he caught & bowled?
After a bit, Charlie signalled to me to get loose. As I began to do some half-hearted stretching and think vaguely about how best to disguise my long-hop, Nick bowled a leg stump full toss that was fairly drilled to me close in and behind square on the leg side. First thought: “that’s seriously travelling – get the bloody hell out the way!” Second: “maybe I should make a token effort to catch this”. Third: “Oh Christ, I’ve only gone and caught it!” The poor old batsman didn’t realise how unlucky he was.

But he was about to... After that moment of glory it was my turn to bowl. The first delivery was a gently looping low full toss which the batsman hit straight back at me. I was so excited about the prospect of taking two catches in as many overs that I promptly dropped it. A sitter. Shortly afterwards I bowled the same ball to the same batsman who played the same shot with the same result. Another bloody simple drop. Oh dear. I also missed a fairly simple run out not long after...

Anyway, I carried on wheeling away with surprising accuracy and a little dip and turn. After about ten overs though, I began to wonder if I’d ever get a wicket. Well I did. As Gamecocks began to search for quick runs their shots became increasingly desperate and I finished with 4 for 39 from 15 overs. Bloody exhausted.

So Gamecocks finished with 136 and Dom Haddock and Henry Capper set about destroying their bowling. Haddock was particularly brutal, punishing anything over- or under-pitched on his way to 67 off 40 balls. He hit three sixes, one of which – flat over square leg – was a real cracker. We lost a couple of wickets towards the end but reached the target three down inside 19 overs to seal a comprehensive victory.
Posted by Tom Jeffreys at 02:12