HHCC vs Bank of England

Haha oh dear. What a hilarious match. Never, I don't think, have I seen Hyde Heath – the mighty, noble Heath – collapse in quite such dismal fashion as we did against Bank of England this Sunday. Never though, it must be said, have I seen the Heath fielding such a weakened team – with both the batting and the bowling looking extremely thin, and, indeed, the fielding. But we can come to that later.... 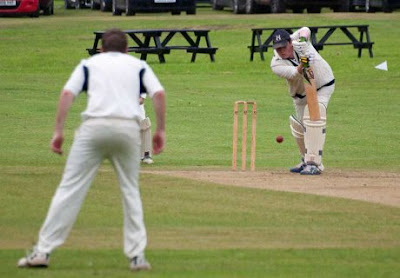 First, the main event: 43 all out. Truly dismal. The rot started with a potentially dubious LBW decision against Dom, who had made 13. Henry then played down the wrong line (or received a vicious off-cutter, depending on who you ask) to get bowled. Spencer was also then bowled, missing a swipe at a low full toss, resulting in the tantalising prospect of the two Cousins – Richard and Will – batting together. Despite some stout defence however it was not to last long, and then we really fell in a heap. Matt clipped to mid-wicket, Jez was caught behind first ball and Liam was bowled, also first ball. I strode out as last man (at number 10) needing to survive the hat-trick ball in order to give Fergus (borrowed from the oppo to give us at least a semblance of a cricket XI) the chance of facing a delivery. Sadly it was not to be, as the ball pitched on a length, shot along the ground and I too registered the dreaded golden duck. 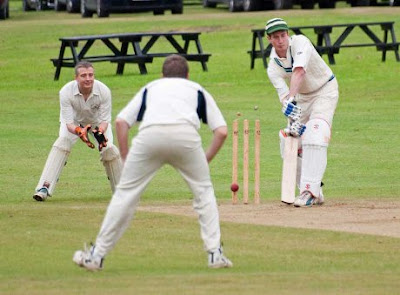 Earlier, stand-in skipper Matt had won the toss and elected to bowl on a pitch that looked like it would offer a bit to the seamer. We needed to take advantage of the new ball, but Jez failed to locate his usual probing line and length, Spence dropped too short too often, and before we knew it, the Bank had 50 on the board without loss. Matt then turned to Dom and I and we exerted a modicum of control, as well as picking up the occasional wicket. I bowled reasonably – and it was good to get a nice long spell – but neither Dom nor I ever threatened to really run through the opposition. Although perhaps things might have been different were it not for our fielding: specifically, Jez dropping not one but two of the all-time dollies (both of them probably as bad as Capper's spill the week before). Cue strop. 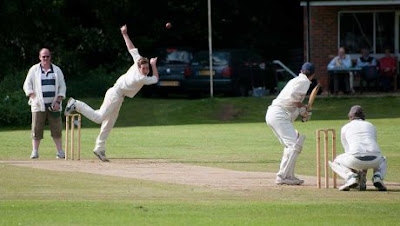 Is that a full toss? Probably...

In the end I took four wickets and Jez returned to bowl full and straight and mop up a tail-end in pursuit of quick runs. The Bank finished on 180, a total which turned out to be well, well beyond us.

On the plus side, Sunday saw the first time Hyde Heath had served up a hot tea – a delicious chilli con carne made by Janet – which is definitely something we could look to add to our repertoire, particularly as the cold and grey of September closes in.

The other positive was that at least it was the Bank of England against whom we collapsed in a heap. They're always a splendid bunch and there's certainly something rather nice about getting to the pub before 6 in the knowledge that the next day is a bank holiday. Good old booze – the universal healer. 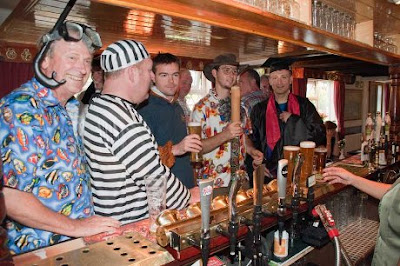 The Bank dressed as Australians. Note the presence of 'The Don'
Posted by Tom Jeffreys at 06:53