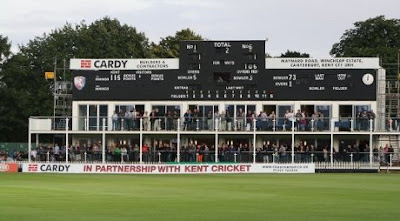 As England began the four days of cricket that would see them pound India into the ground and in the process overtake them as officially the best Test side in the world, I was not at Edgbaston with them. Nor was I at my desk, with the cricket on one screen (praise be to Sky Player) and some token 'work' on the other. No. Instead, I spent the day down in Canterbury with Matt Sims and his cronies from Pett's Wood and elsewhere, watching some turgid second division cricket in the form of Kent against Surrey.

Things started attractively enough as Kent, who won the toss and elected to bat, fairly raced to 80 off 19 overs, courtesy of attractive innings from England hopeful Joe Denly and rotund England once-was Rob Key (whose double century at Lord's I'm proud to say I witnessed first-hand way back in 2004). But from there progress ground to a halt as a succession of Kent batsmen scratched around and then got out as soon as they got into double figures.

When their sorry innings was over, it was Surrey's turn to get off to a flier – closing on 50 without loss after 12 overs, mainly thanks to the aggressive skipper, Rory Hamilton-Brown.

From following the match on Cricinfo, I see that Surrey collapsed in even grimmer fashion than Kent (to the innocuous medium pace of Darren Stevens of all people – any relation, Jez?), Kent set a stiff target of 370 on the back of what must have been a brilliant innings for Rob Key (after his unbeaten hundred, the next highest score in the whole match was 49) and Surrey folded to Stevens again (and James Tredwell, rather hilariously). 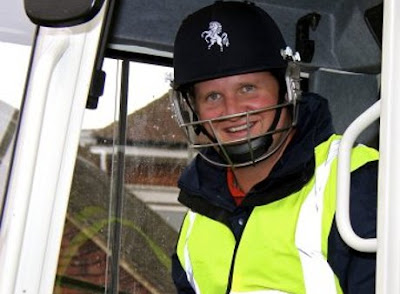 Now, you might think that such a day's play would have confirmed all the sterotypes about county cricket being boring and internationals being where it's at etc. Well kind of, but also it did the opposite. I've spent three days at the two Lord's tests this season (and I'm off to the Oval this Thursday) but to be honest, this was by far the most enjoyable occasion. Lord's I love, but only when you do it right – in the Tavern stand with the members and friends, gently pickling yourself in delicious wines, then snoozing off in the afternoon session, before being rudely awaken by people applauding something happening in the cricket. It's so inconsiderate...

But Lord's isn't always so perfect – one day we were over in the Compton Stand, and the view from under the ugly concrete platforms really is an unpleasant one. That and of course half the people at Lord's are dreadful, and there's so bloody many of them queuing and queing to drink themselves senseless. Even when we were in the Tavern, we arrived at 9.30am ( full hour and a half before play) and still couldn't get five seats together – such was the eagerness of the MCC members, or more aptly, such were the numbers of seats block-booked for corporate jollies.

Canterbury on the other hand is a little saggy round the edges, slightly dilapidated – particularly in the brilliant Frank Woolley Stand (not Frank Worrell as I had mistakenly enquired of a bemused looking steward) – and decidedly parochial. But therein lies its (and indeed cricket's) charm. Here, during Canterbury Cricket Week time, are dedicated cricket lovers (as opposed to blazered bankers), happy families, kids (and us) playing cricket on the outfield, bacon baps (for which one doesn't have to queue), and kegs of delicious real ale for £2.90 a pint – the highlight being Harvey's delightful Olympia golden ale, brewed a few miles away in Lewes, East Sussex. It really is a wonderful atmosphere here – one that revolves around the cricket, but doesn't totally rely upon it. What a joy.