And so, like that, Hyde Heath's 2014 season came to a close with a match almost completely sullied by some of the worst behaviour I have ever witnessed on a cricket field. You know that thing teachers always say – “It only takes the actions of a few to ruin it for everybody” – well, this was a case in point. We've played Ivinghoe & Pitstone for years, and they're a great side. They play the game like us: hard but fair, trying to win, but having a chat and a laugh at the same time. All, that is, except for a few. Unfortunately, one of those few was the opposition captain, and he behaved not like an adult, and certainly not like the captain of a respected club like I&P, but like a spoilt little infant who had lost his favourite rattle.

The irony is, as Charlie pointed out afterwards, that rather than take his rattle away, we had actually returned it to him. He took our largesse not with gratitude but with the kind of attitude that sees fixtures get dropped.

Anyway, enough rattle metaphors: to the tale itself...

It began, as so often, in farce, as by the scheduled starting time of 1pm Hyde Heath had barely half a team. By 1.15, we had nine, and got started. Soon, the oppo were in a pickle, with new boy Anees bowling beautifully (perfect line, decent pace, a bit of bounce and some movement either way). I made a very easy catch look very difficult (caught between my legs at mid-off) before, much to everyone's amusement, Jez pitched up and immediately snaffled a sharp chance at gulley off Anees. Only the ball before, Capper was querying Charlie's decision to persist with not only one gulley but two. Admittedly, it's the first catch I can recall there since the glory days of James Aird.

And then it happened.

Luke ran into bowl, delivered a knee-high full-toss, which their captain bunted back at him to be safely pouched. We all converged on the bowler to congratulate him. At that point, instead of walking back to the pavilion, the batsman (their captain) appealed against the umpire, crying in no uncertain terms that it ought to have been a no ball. The square leg umpire disagreed, but nonetheless, the fellow umpiring at the bowler's end decided, after concerted pressure from his captain, that it was indeed a no ball. In the most spineless display of umpiring you could wish to see, he held out his left arm. “No ball,” he whispered meekly.

Understandable, we were pretty irritated, but Charlie told us that if that was the umpire's decision then we would get on with it. Rattle duly returned.

But that was not the end of it, not by a long shot.

For the rest of the innings, every single time that a fielder made any kind of noise, the batsman, John-boy (as he seems to be known) decided to walk away to square leg and lean on his bat until absolute silence had descended. Ben counted that he did this no less than 43 times over the course of his innings (he eventually made 70 or 80). Assuming each delay used up around 30 seconds, that is 21½ minutes of their innings wasted. As you can imagine it was monumentally tedious for the fielding side, not to mention hypocritical: somehow, “John-boy” was only ever put off by Hyde Heath players (and the occasional plane or distant child). The sporadic din of garbled drivel coming from the his own side seemed not to affect him in the slightest.

It was also counter-productive: we only ended up bowling 32 overs, and that was despite the fact that they didn't bring us any drinks at the half-way stage of their innings. Not that it really mattered: Uzi and I were both expensive (although I finally removed “John-boy” well stumped down the leg side by Capper) and Anees returned to finish things off with a six-wicket haul (including a beauty of a slower ball nicked to Dom at 1st slip). They were all out for 162.

And then the fun really started.

After an excellent tea, the Hyde Heath openers were ready for action. 10 minute early no less. Understandably, “John-boy” was not keen for us to have the extra batting time, but he even refused to allow us to move the clock forwards in order to get on with the game. Instead we all stood and waited for ten minutes, despite protestations from his own team. 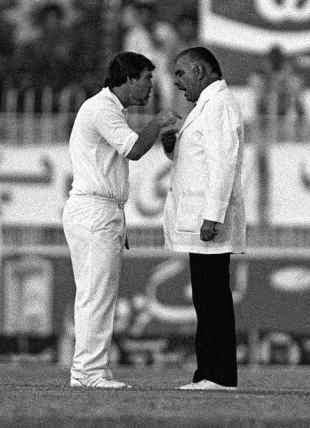 Once things got under way, there was time for yet another moment of petulance from “John-boy”. I accidentally hit a drive from the nets onto the field of play. “Sorry!” I shouted. He walked towards the ball, picked it up, and chucked it into the trees.

Unsurprisingly, our batsmen received a relentless barracking from this “John-boy” stationed at 1st slip, and several of his cronies, including the half-witted umpire who had caused the problem in the first place. (Amusingly, this chap fielded down at fine leg for a fair amount of their innings and we actually had a bit of a chat. Much to my surprise, Jez even brought him a glass of squash – thereby conclusively securing the moral high ground for the Heath. It was only when in proximity to his captain that he behaved like an oaf once more). Our umpires – Tim Barnsley, Richard Cousins, and Charlie – were also relentlessly heckled. So much so that Richard stepped in to tell their captain in no uncertain terms to keep his mouth shut and stop questioning our umpires. Cue some fantastic finger-waving antics, reminiscent of Shakoor Rana and Mike Gatting all those years ago.

What is funny about situations like this is watching fielding sides get their knickers in a twist. When I came out to bat, they appealed for everything – LBWS when I was halfway down the track and outside the line; caught, when even their own fielders (one of the sane ones) admitted I hadn't hit it – and then got increasingly outraged as none of these ludicrous appeals were given out. It's unfair, they cry! What I&P failed to realise is that Barnsley actually loves giving our players out...

That said, Richard's parting words at the drinks break were hardly likely to pacify matters. And then he got in his car and drove off, leaving us to deal with the aftermath. Thanks Richard!

Fortunately, by the time my batting was needed, we were nearly home. Dom and Henry had laid a solid platform against some high-class bowling and extremely tight fielding. Henry fell clipping to midwicket, but Dom and Shrimpie held firm amid the abuse and built a partnership to break the back of the opposition's total. Dom eventually fell for a well-composed 35, Uzi timed a few blows before getting himself out, and I came in to steal a bit of glory at the end.

All the while, Shrimpie was playing a blinder: impregnable in defence, decisive in attack – his cover drives both elegant and forceful. But it was the mental strength never to rise to the bait that marked this innings apart. Not once did he lose his cool and attempt to whack a few statement boundaries; he simply kept batting until the game was won – fairly comfortably in the end. It was probably the best innings, given the circumstances, that I can remember seeing at the Heath.

Afterwards, like adults, we shook hands with the opposition – all except one. The captain, “John-boy”, had already fled to the pavilion. Then, just as they were leaving the pub, he had the cheek to criticise our tea – despite admitting to having not eaten any of it. So not exactly a trustworthy witness then.

The worst/best thing is that the majority of his team were happy to have a drink and a chat in the pub afterwards: they knew he'd behaved disgracefully, and many apologised to us on his behalf.

If a Hyde Heath player ever behaved like that they would never play for us again. I'll be interested to see how Ivinghoe and Pitstone proceed.
Posted by Tom Jeffreys at 23:23