HHCC vs The Misfits

Usually Cack Awards are awarded to an individual on the basis of an individual balls-up – an embarrassingly easy dropped catch for example, or being called Atif – but yesterday's match against The Misfits made a persuasive case for the awarding of a Cack Award to the entire team.

With the exception of Captain Charlie, Dom Haddock and Henry Capper, our fielding was universally diabolical. The Misfits batted first, and out of a total of 170, I reckon we gave away about 40 runs through appalling ground-fielding alone. I dived over two that went to the boundary, Ali barely moved for anything, Will and Ben let numerous shots through their legs and Brad gave away four overthrows with a shy at the stumps that went horribly wild. Basically we were terrible.

Dom places one through the leg side
After a really stodgy start – in which Jez was tidy and Ali unlucky not to take more than a solitary wicket, so often did he beat the bat – the Misfits' innings began to gather momentum. Richard Austin's off-breaks were expensive (mainly due to our shocking fielding), I didn't bowl very well and Ali's return spell was costly.

But with a flat old pitch and against a fairly average bowling attack, 170 didn't look like too much of an ask, especially if we got a decent start. Which we did. Haddock made a quick-fire 44 before skying one to long-on, and Capper batted through for a sensibly aggressive 73. I made 27 quite calmly before getting bored and having a hoick, and Brad finished things off in style with a six. We won by 8 wickets. Job done. 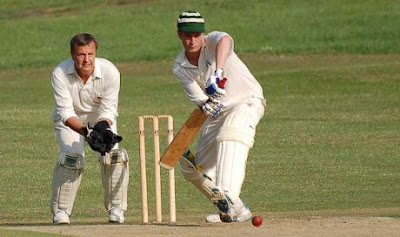 Me blocking
Posted by Tom Jeffreys at 06:09