May at the Heath

Gosh it's been quiet on Cricket Tragics recently – my sincere apologies. I spent 16th May gorging on Michelin starred food and living like a lord at the rather splendid Brocket Hall, while back at the Heath it rained a bit and we won.

30th May I was in Hay-on-Wye pretending to be clever by going to the Hay Literary Festival, and in between times I was controversially rested, in accordance with the Hyde Heath rotation policy. Although it's been in effect for some years, the 2010 season is really seeing a step up in the implementation of this strategy. As we all know, player burn-out is a serious issue affecting today's village cricketers, particularly with the the increased schedules and the intensity with which the game is now played (I can't believe I'm no longer allowed to sit and smoke on the bench at the backward point boundary).

Anyway, we also beat Warner's End (whoever they are) and I assume we beat Ley Hill (but I'm still awaiting confirmation). Needless to say, I'm bloody raring to go for this Sunday's grudge match against, um, TBC. 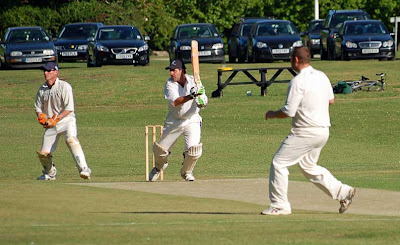 Nicko plays through the, gasp, off side.
Posted by Tom Jeffreys at 01:53