A whole weekend of cricket at the Heath – what could possibly be better? Well, it's always nice to take a few wickets or score a few runs I suppose. And guess who did a bit of both? Only bloody me of course.

Saturday saw the Heath take on The President's Invitational XI who this year were a particularly strong outfit. We 'won the toss' and fielded first, but with Ali playing for the President's, Richard and Luke still not at full fitness and Amala unable to make the journey, our bowling was a little light, and it showed. They racked up an impressive 217 on the back of a hard-hitting half-century from Oli Haddock. I took a bit of a pasting early on but then settled into a rhythm to take 6 for 50 as the middle and lower orders perished in the pursuit of quick runs. And that was despite four dropped catches, although one – Nicko diving full stretch at mid-wicket – would have been the snaffle of a lifetime. 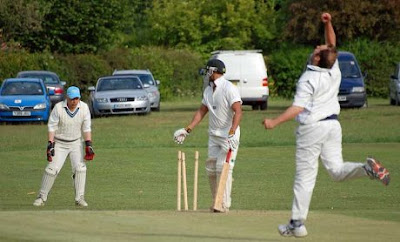 Unleash hell; Tim Nutman strikes again
Anyway, it looked like being a tough task, particularly as without Dom Haddock, James Shrimpton, and Amala we were pretty light on batting as well. We needed a good start. And didn't get it. Tim Nutman hit a good length and bowled straight and that seemed to be enough as our top order crumbled. Some were blaming the booze, but Tim did bowl well and, at 30-odd for 6, a draw was all we could hope for. And despite Luke's best efforts, with support from Ben Sonley, we were bowled out with an over to go. A pretty convincing defeat.

On Sunday the Heath took on the might of the Plough (reinforced by Jez as skipper, Henry Capper and Luke). We bowled first (as ever, it seems) and with Brad and Ali finding some swing, they were quickly in trouble. It was left to Capper to grind things out, whilst at the other end Luke played with a combination of class and power to finish unbeaten on 82. There was one back-foot straight drive that was particularly sweet. I dished up two overs of filth (rather resting on my laurels I think) and dropped two catches. The second – a spiralling top-edge off Nutman – involved some rather unsportsmanlike behaviour from Stevens, who yelled “DROP IT!” just as I was about to do so anyway. Really, Jez.... No pain, no gain - cricket literally happens
Anyway, the Plough were all out for 154, and James Shrimpton and I strode out to open the batting. A couple of hours later we wandered back in having knocked off the runs without the loss of a single wicket – an opening stand of 154. Shame it doesn't count for the avergaes.... Shrimpy batted beautifully for his hundred – there were some scorching cover drives and imperious pull shots and it was really ratehr pleasant to simply watch him bat. I pootled along at my usual dour rate, getting to 50 just in time. I managed the odd boundary here and there with a cover drive or a late cut, and that was it. An impressive ten-wicket victory.

A splendid weekend then – good old cricket.
Posted by Tom Jeffreys at 05:57