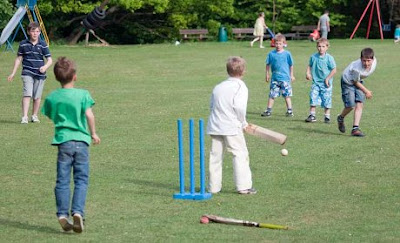 HHCC Academy of Excellence
Apologies for the delay in getting the first match of the season written up. Regular readers have been emailing in threatening to cancel their subscriptions if I don't get a move on, and I had promised that the much-heralded new direction for Cricket Tragics wouldn't alienate our existing audience. Sorry!

And so to the cricket, the long-awaited first match of the season. Surprisingly, the day dawned bright and fair, and Charlie won the toss, and we fielded, of course. I can't remember all that much of what took place, other than rather predictably – after the amazing net sessions, and the promising warm-up match – I dished up a load of old tripe and got panned round the park. The others bowled well though, particularly Brad, who after an understandably rusty first couple of overs, really found his length and some movement back in through the air. Some of his deliveries genuinely looked unplayable and he removed the cream of Chartridge's top order (ie the one guy who actually looked like he might be good).

At the other end I leaked runs like an incontinent mutt and Chartridge took tea on about 150, eminently gettable we assumed, and we were right, just.

At 105 without loss we were cruising. Dom and Henry were batting well, easing smoothly through the gears and run rate wasn't much of a problem. But then it came. The inevitable Hyde Heath collapse. I think we lost 7 for 40 on our way to making an absolute meal of an extremely straightforward chase.

After a series of misjudged strokes, it was left to Brad and Ali to score 6 off the final over, with just two batsman waiting in the pavilion. Ali crunched an elegant square cut, and scarpered a single to level the scores. 1 to win off the final ball, it came down to. Cool as you like, brad played an immaculate forward defensive. And ran. Ali hared down from the non-strikers end. The throw was wild and we were home in some style. Quite what style though, I'm not entirely sure.

A note in passing: I suspect that the reason certain readers have been so desperate for the Tragics report to be published is that instead of loyally supporting the mighty Heath throughout the dying moments of a truly electric cricket match, they elected to pay a visit to the Plough. For shame!
Posted by Tom Jeffreys at 09:14