Chinaman - The Legend of Pradeep Mathew 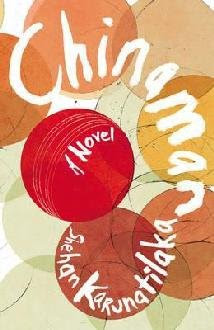 There pretty much couldn't be a more perfect book with which to kick off this blog's foray into the world of literature. It's about cricket, obviously. It's about spin-bowling, which is nice. And the avuncular narrator is an unreliable drunken hack – something that should be fairly familiar to regular readers of Cricket Tragics.

Coming soon after Sri Lanka's appearance in the final of the 2011 World Cup (a tournament that they also co-hosted with India and Bangladesh) and amid accusations of widespread match-fixing made by former Sri Lankan batsman-wicketkeeper Hashan Tillakaratne, this is an apt moment for the publication of Shehan Karunatilaka's debut novel, Chinaman.

The novel centres on boozy middle-aged cricket writer WG Karunasena (known as Wije), his neighbour and friend Ariyaratne Byrd (Ari) and their quest to revive the reputation of fictional mystery spinner, Pradeep Mathew. Having seen him play in several matches in the mid-90s (before Sri Lanka's epoch-defining World Cup victory under Arjuna Ranatunga in 1996) Ari and Wije are convinced that he's their nation's greatest ever bowler. Like a cross between Murali, John Gleeson and Ajantha Mendis, Mathew is said to have bowled a bewildering array of deliveries – a Chinaman, googly, undercutter, doosra, Carrom ball, and several others, including, most fantastical of all, the double bounce ball, which bounces twice and turns a different way each time.

But Mathew is a mystery in more than just the way he bowls. In a highly stratified, divided and corrupt system (Sri Lankan cricket and politics more generally) Mathew riles his seniors, upsets those in authority and never plays more than seven Tests before fleeing to New Zealand in controversial circumstances. So keen are the authorities to airbrush Mathew from history that all official statistics are erased – although, amusingly, the publishers, Jonathan Cape, have set up fake Crikipedia and Cric1nf0 profiles to whet the appetites of stat-mad, internet-savvy cricket fans.

Make no mistake: this is a cricket book. It doesn't – like, say, Joseph O'Neill's much hyped but inferior Netherland – seek to use cricket as merely the means to explore other issues. This is a book steeped in a love of cricket, but a modern, commercial, corrupt, but still magical version of the sport we love. The last few years have seen the balance of power in cricket shift inexorably towards the sub-continent (event the ICC have been based in Dubai not Lord's since 2005) and now we have novel to reflect the times. Not for Ari (or the author) the ever-glowing Edwardian England of the tediously verbose Neville Cardus.

Paedophilia, match-fixing, violence, wealth, poverty, racism, and the complexities of contemporary Sri Lanka are all explored in this dense, sprawling, at times rather confusing work. With so many shifts in time and tone, sometimes it can be hard to follow exactly what is going on and when, but then this is fitting – both to the manic bustle of the backstreets of Columbo, and to the hazy, boozy recollections of our utterly charming, but badly flawed, narrator.

Chinaman is frequently hilarious, genuinely moving in places, and expertly evocative both of Sri Lanka and the intricate complexities of the the slowest, greatest sport ever invented. Like its narrator, Chinaman is flawed, but, in Karunatilaka's deft hands, it works. This is a truly brilliant novel – I urge everyone to read it.

Chinaman is published by Jonathan Cape. It's available on Amazon.
Posted by Tom Jeffreys at 06:27