HHCC vs The Lee 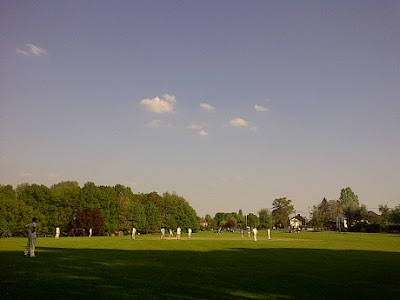 They say that with the truly great sporting teams – and I'm thinking of the 1970s West Indians here, Bradman's Invincibles or Australia under Steve Waugh – it's not about never making mistakes, for that would be impossible. It's about learning from those mistakes and avoiding them in the future. Well if the speed at which that lesson is learnt is an accurate indicator of greatness, then Hyde Heath have just etched themselves into the history books.

Last week you may recall, our middle order crashed horribly in pursuit of an eminently gettable 150. This week, in pursuit of roughly the same target, history looked like repeating itself. But no! Hyde Heath stood firm, and despite a mini-wobble, Ben Sonley played sensibly and James Shrimpton (40*) with customary élan to see the team home with consummate ease.

Earlier, stand-in skipper Bradley Hoult had won the toss and fielded against what was a decidedly youthful Lee XI. To make up for it, it seemed, The Lee decided to opt for some dubious umpiring tactics and wided everything in sight. Jez kept things tight and picked up a couple of wickets, but Brad was a little wayward early on. I came on, and once again got the treatment, although in fairness I did bowl better than last week – I just kept hitting a middle and leg line against a batsman whose one shot was the sweep. Not ideal.

Thankfully Shrimpy wheeled away with impressive changes in pace to pick up four wickets, Jez returned at the end to mop up the tail (and earn him the privilege of buying a jug), whilst a run out accounted for the other dismissal. In between all this I managed to take a catch – amazing! It was a bloody dolly though.

And then it was our turn to bat, and with the top order all contributing it was a walk in the park. Almost literally.